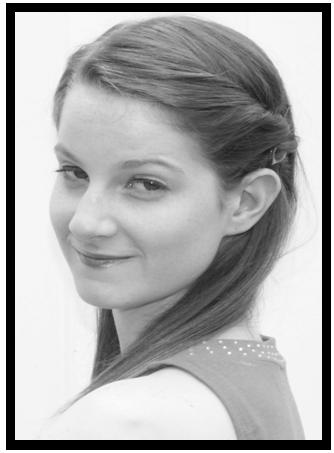 Becky has been dancing at the Joan Harris Centre for since 2004 and has studied Ballet, Tap and Jazz. Along with being in Main Stage Productions and Community performances she has been in the school’s full-length ballets playing supporting roles in “La Fille Mal Gardee” Lisette Friend, “Sleeping Beauty” Song Bird Fairy, “Puss In Boots” Princess Companion, the lead role in “Coppelia” Swanhilda, The Dove in Snow White and Amour in Don Quixote. Outside the studio Becky has been in Moscow Ballet’s Great Russian “Nutcracker” and “Swan Lake”. Becky has also served as the assistant regional coordinator for the Moscow Ballet appearance at the Kirby Centre helping train area dancers for their appearance with the internationally touring group. She also has appeared in musicals theater productions throughout Luzerne County. Her roles have included Rosie in Bye, Bye Birdie , Erma in Anything Goes, Dorothy in Thoroughly Modern Millie, and Maggie in 42nd Street to name a few. Becky has auditioned for companies like the Radio City Rockettes and Disney. Miss Becky is currently working at Berkshire Hathaway Guard Insurance Group in Wilkes-Barre, Pennsylvania.